I have never been so determined to take a class! The announcement of Laure Coutellemont’s summer tour dates sent hundreds of fans across Europe and beyond rushing to eventbrite.com to secure their place in her Ragga Jam workshops.

I first came across Courtellemont in 2012 when she released this video of her choreography to Miss Fatty by Million Stylez. Since then I’ve followed her career as a teacher, choreographer and innovator of the Ragga Jam style from her hometown of Paris to her current base in Los Angeles. In her own words, Ragga Jam “is an expression of the Afro-Jamaican culture: Dancehall” – the key word there being expression. Courtellemont has been subject to a certain amount of criticism from those who perceive her work as an appropriation of the Jamaican Dancehall culture.

Dancehall emerged out of reggae music in the late 1970s within the poor inner-city areas of Kingston and has developed to become the leading form of popular culture in Jamaica. The dancehall space itself is often a site of clashing between uptown and downtown social strata in Kingston, whereby uptown residents equate dancehall to criminality, slackness and violence (Stolzoff:2000). However, for many downtown youths in Jamaica, dancehall provides a source of income, access to jobs and thereby a source of social mobility. The music and dance provide a means to sell labour and products on an international market. Through social media platforms dancehall artists and crews can gain notoriety and become in popular demand for concerts and workshops worldwide (see Big Up Kemp, a dancehall festival taking place in Europe, Russia and South America).

For Courtellemont, Dancehall is not part of her culture or lived experience in Paris. However, she does recognise this and states her objective is to “teach and choreograph these rhythms and this dance that was not known before, coming from Streets of Jamaica”. 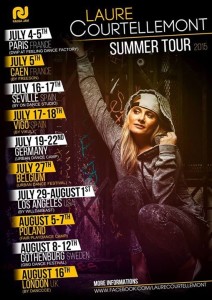 On 16th August Courtellemont delivered two 1.5 hour classes back to back. In the first she went through a number of Dancehall foundation steps including the bogle, willie bounce, wacky dip, row like a boat and nuh linga almost as an introduction to Dancehall before creating a routine. The second class focussed more on her own style that combines Dancehall steps with a more Hip Hop musicality – by this I mean executing sharp movements and small, clean gestures that follow different layers of the rhythmic pattern. The routine she created for this second class was choreographed to Drake’s The Language and can be viewed here.

Laure Courtellemont is a very enthusiastic teacher and gives great energy and motivation in her classes. She is able to describe the feeling and intention behind a movement as well as the title and origins of each step as created by Dancehall crews in Jamaica. At the end of the second class she spoke honestly about her reception around the world and that many people do not agree with what she has made a career doing. Yet she also spoke about her method, in that she has never and will never create a Dancehall step herself – she will teach those others have made giving full credit to them (as she did in the sessions) but will place them together in a way that is unique to her and her style Ragga Jam.

As participants, we were also lucky enough to see an extract from her new solo as well as a freestyle with other members of her team. It was a fantastic class (though I do wish they could have been two hour sessions, parts did feel rushed) and I am so glad I was finally able to meet her and have a (very!) sweaty photograph with her after the sessions were over. She took the time to speak to everyone who wanted to meet her individually and was very open and welcoming of every conversation.

Though there are still some arguments about the type of work she is doing and how she is using the Dancehall culture for her own means, I would absolutely recommend taking her class before making any judgements. From dancing with her to hearing her speak about the form, it is absolutely clear that Laure Courtellemont respects and appreciates Dancehall culture and in her own words is keen to be “the bridge between two worlds” – she is able to (in her own way) replicate the energy and motivation of Dancehall and wishes to share it with the world through Ragga Jam.