Taking inspiration from one of London’s pioneering bookshops Bogle L’Ouverture, the No Colour Bar exhibition showcases a selection of works by Black British artists as well as letters and photographs that illustrate the struggles of equal citizenship in Britain between 1960-1990.

The focal point of the exhibition is a re-creation of Bogle L’Ouverture, Eric and Jessica Huntley’s bookshop and publishing company. Renamed The Walter Rodney Bookshop in 1981, it was one of the first Black-owned independent publishers in Britain and created space for those marginalised and mis-represented in society to come together with a collective voice.

From it’s opening in 1968, the premises was subject to a number of racially motivated attacks during its lifetime in London’s South Ealing, including a series of break-ins, vandalism and theft. These are documented in a collection of photographs and letters displayed in the exhibition and give further insight into the realities of the struggle for Black liberation both in Britain and abroad during the 1960s-70s. 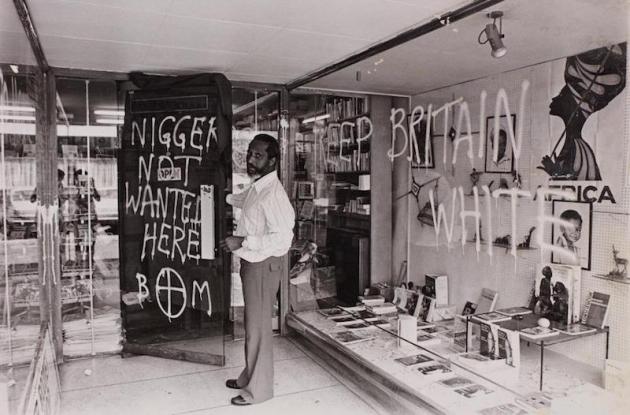 Image of Eric Huntley discovering Bogle L’Ouverture has been vandalised, 1977.

For me the most striking pieces in the gallery are three art works all made in 1983. Tam Joseph’s UK School Report is a commentary on the perceptions of young, Black male hairstyles and how these are used to form character-judgements and stereotypes in schools that are almost certainly still in use today. 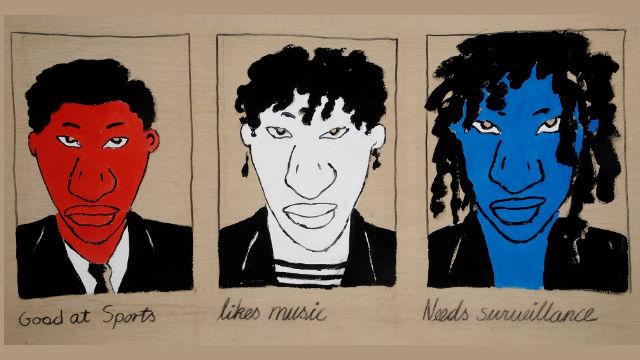 Keith Piper’s (You Are Now Entering) Mau Mau Country is a huge hessian and canvas work (hanging 246.5cm x 192cm) that encapsulates the colonial fear of entering into ‘unknown’ lands, the second face only appearing in the acrylic upon second or third glance. Piper addresses the power of these figures as something that belongs to them, as opposed to a notion that has been placed on them by outside forces. They were powerful before they were tested. 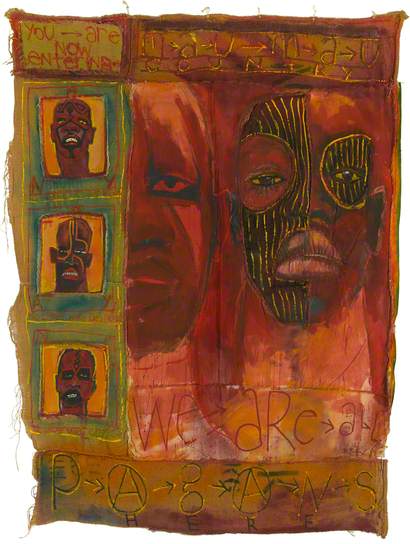 Finally, Eddie Chambers’ piece How Much Longer You Bastards uses newspaper clippings, photographs and other media to illustrate the inhumanity of the apartheid system. Using the logo of Barclays Bank alongside the infamous photograph from the Soweto Uprising of two parents carrying their young daughter, killed on her way to school criticises corporation’s involvement in such a brutal system. 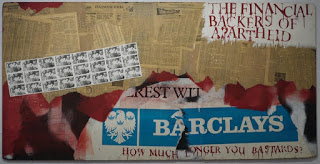 © Eddie Chambers, How Much Longer You Bastards, 1983, Museums Sheffield

The exhibition celebrates the contributions of Black British artists to our cultural landscape here in the UK. Documenting the struggle for recognition and equality in 1960s Britain and beyond, the collection works to recreate the Bogle L’Ouverture – a space where academics, writers and artists came together to share knowledge and cultural experience as an advocate for equal rights and social cohesion.

At the same time as this celebration of Black art and literature at the Guildhall Art Gallery, Goldsmiths University of London has recently announced a new MA programme in Black British Writing running from September 2016. The course addresses black writing ‘as a continuum…it’s heritage in British culture is considered along a trajectory marked by historical presences as connecting with migratory, indigenous and global perspectives’. The course is the first of it’s kind in the UK that looks specifically at Black British writing and the contributions such writers have made to our literary canon.

No Colour Bar and the MA Black British Writing both indicate an exciting development for the recognition of black cultural history within Britain. You may not be looking to take an MA, but the exhibition is definitely a no-brainer!