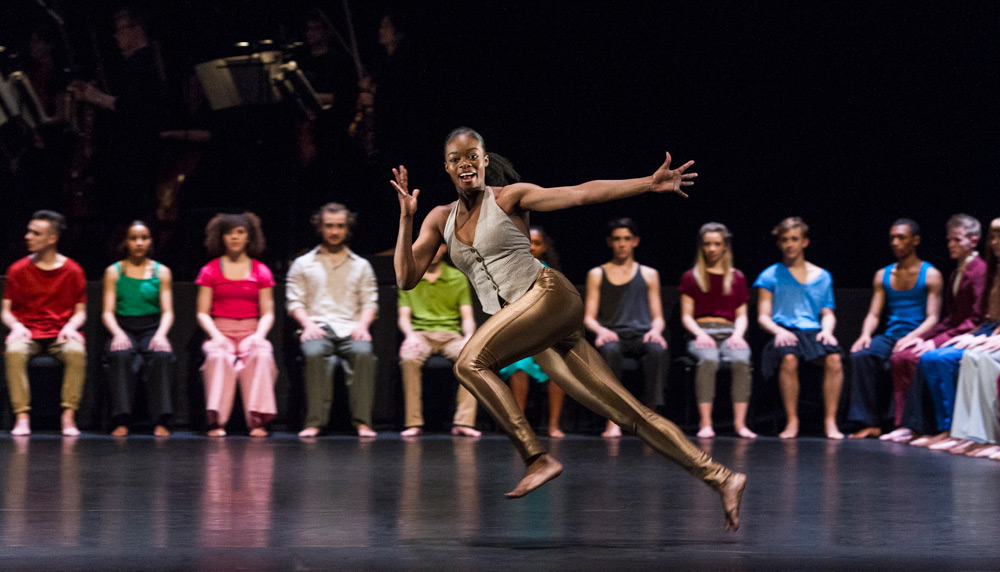 I have seen NYDC perform In-Nocentes three times this year and I would happily see them again.

The National Youth Dance Company was formed in 2012, hosted by Sadler’s Wells who secured the tender earlier that year from Arts Council England and the Department for Education. A key part of Sadler’s offer for NYDC is it’s use of Associate Artists, Resident and Associate Companies, and New Wave Associate Artists to lead the artistic process, working with company members to create innovative and influential dance.

This year (2015-16), the Guest Artistic Director was critically-acclaimed Micheal Keegan-Dolan, Founder and Artistic Director of Fabulous Beast Dance Theatre. In-Nocentes premiered at Sadler’s Wells on Thursday 7th April 2016, before embarking on a national tour across England. I was lucky enough to see it in London, Leeds and finally in Manchester as part of U.Dance 2016.

The piece is one of the strongest in NYDC history. Keegan-Dolan has worked so closely with the 40 young dancers to forge something that is seamless and very much owned by them.

Quite often, the tendency with youth dance choreography is to create something that displays angst or frustration, or collective aggression. Yet In-Nocentes completely removes itself from this pattern, and shows the dancers calm and centred, with a real sense of joy in their movement.

Stand out moments for me include two of the male dancers coming slowly together amidst the business of the other activity on stage – drawing the audience in to a real human connection emotionally as well as physically. Another is when the entire cast gradually join a canon of Caribbean-influenced movement using their arms, head and hips in isolation. Stemming from my own movement preferences, a key section for me is when five of the male dancers step out and showcase their own flavour: Christian (West Midlands) waving and isolations; David (London) voguing, Ethan (London) ballroom and latin, Kennedy (West Yorkshire) Caribbean, and Tre (London) waacking. This section was so well formulated, it didn’t fall into the trap of ‘gimmick’ at all and really captured the spirit of these young artists on stage.

Set to Max Richter’s re-composition of The Four Seasons by Vivaldi, this new commission sees Keegan-Dolan celebrate the innocent, natural and instinctive way in which young people can move, dance and behave, in contrast to the way adults learn to live with caution and out of harm’s way. In-Nocentes denotes the bravery of youth to throw themselves fearlessly into a situation without restraint. Image by Foteini Christofilopoulou.

Over the past four years, NYDC has build a reputation for producing work of the highest quality that pushes the perceptions of what youth dance can and should look like. In-Nocentes is an outstanding addition to the NYDC repertoire and I would gladly see it again if I could!