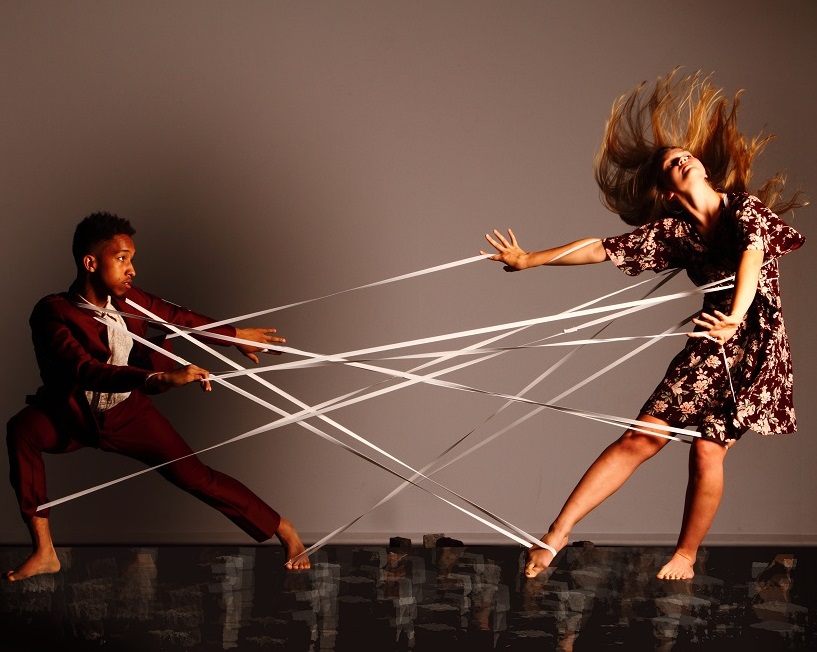 Now in its fifth year, the National Youth Dance Company premiered its latest work Tarantiseismic by Damien Jalet at Sadler’s Wells on Wednesday 19th April 2017 to a receptive audience.

Exploring both tarantism, a form of hysteria reported in southern Italy between 14th-18th Centuries, and seismic activity – the piece explores the uncontrollable. 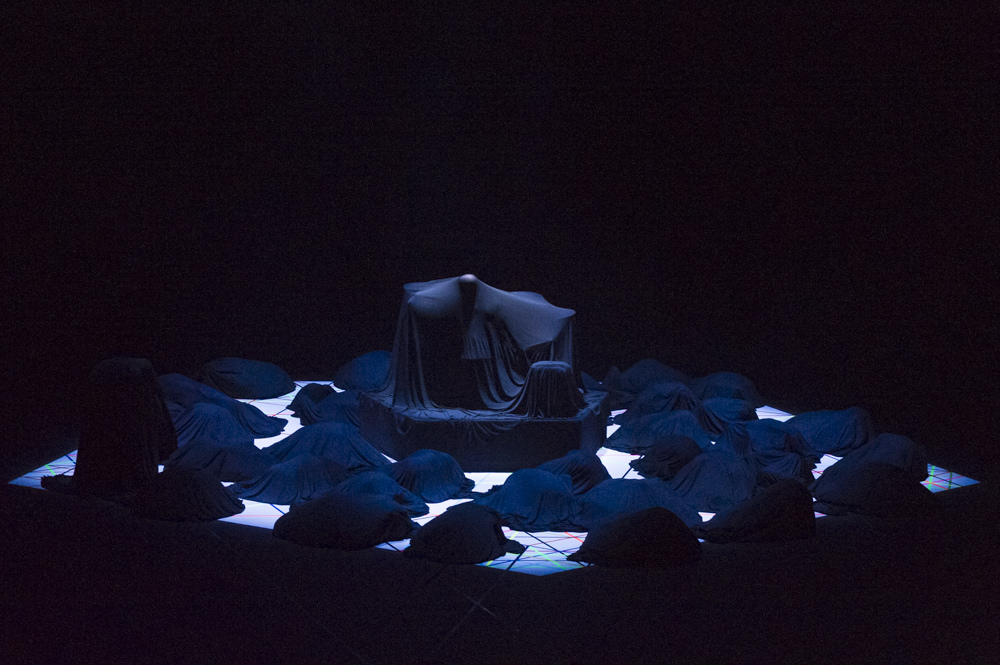 Tarantiseismic opened with the dancers cloaked in dark material, rising and falling in canon around a covered podium on which composer and musician Dave King beat out a heavy pattern.

Later, the dancers erupt from the darkness and we see them step into space in groups of three, each showing individual material but always relating to each other through a distinct shaking that recurs throughout the work.

All 39 stand in a group, staring out accusingly to the audience. One dancer begins chanting “unwanted, unworthy…” until they all repeat negative prefixes – building to a crescendo before suddenly returning to silence. 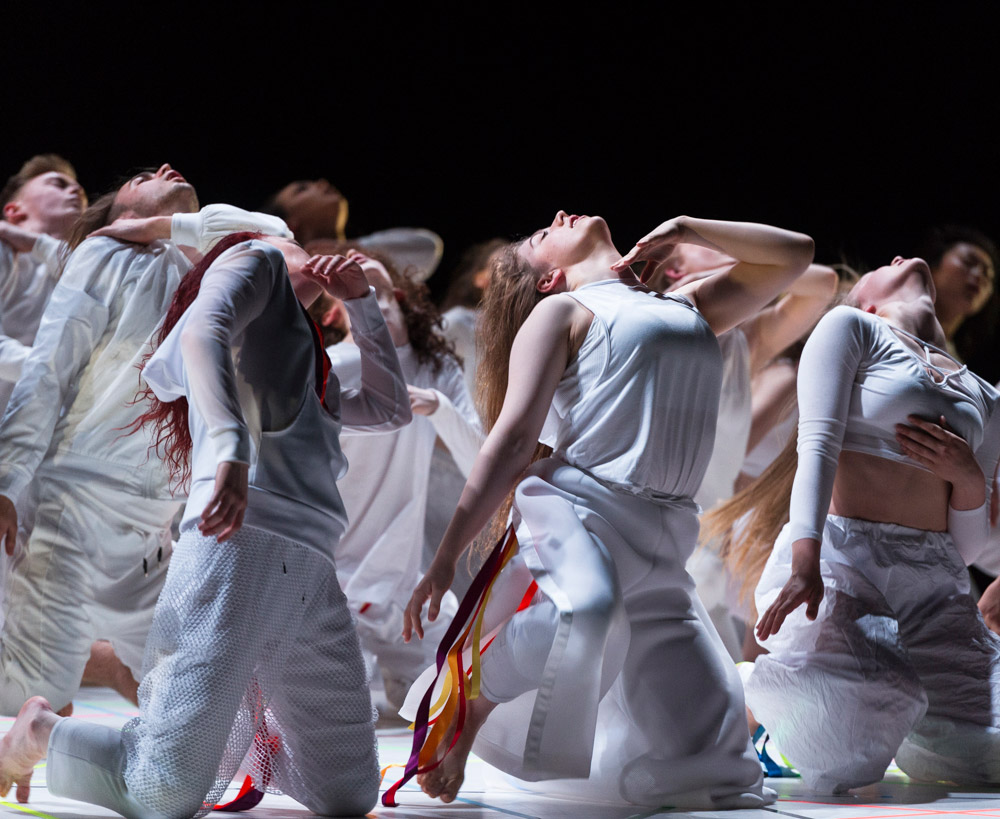 Heavy breathing, contracting sharply and relinquishing into the floor. Long hair flies as the dancers throw their heads in all directions.

At last we are transported to a vibrant, almost Daft Punk world. The dancers perform around the podium we saw at the start, King is uncloaked and wearing a black morph suit. The cast hit the beat with their bodies and move ritualistically around him, before selected dancers break off to come to the front and showcase aerial tricks. 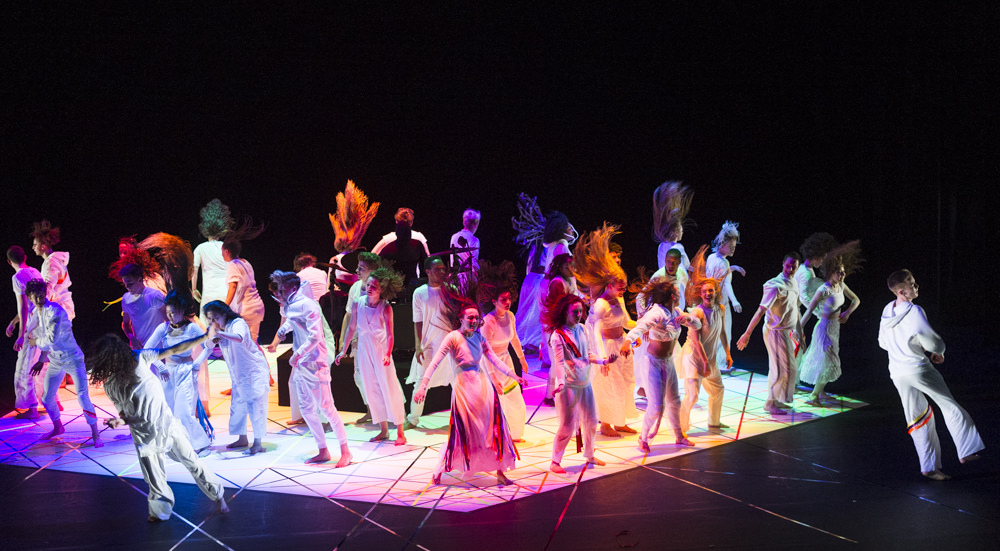 The dancers were wholly committed to the choreography and it was clear how much they had given of themselves on stage.

Artistically, Jalet let them down. NYDC prides itself in creating work of high artistic value. Through its home at Sadler’s Wells and its commissioning of SW Associate Artists and Companies, it is supposed to be the antithesis to what youth dance is often perceived to be or limited by. Audiences should watch NYDC’s work and feel as though they are seeing a piece choreographed for professional dancers, allowing them to marvel at how 16-18yr olds with no vocational training can achieve such a standard.

The cloaked opening, the predictable use of speech, the use of hair as motif, the backflips at the end – all read as youth dance. Perhaps on a smaller stage, without the legacy of the previous four premiers behind it, the work could have had a more powerful impact.

I should perhaps reference my own potential bias, in that I was involved in the initial set up of NYDC back in 2012, and have felt a strong connection to (and high expectation of) the company ever since.

For now, I’m left impressed by the young dancers, and how well they must have worked together for those four intensive weeks of creation – but I can’t help but feel as though they’ve missed out on something.