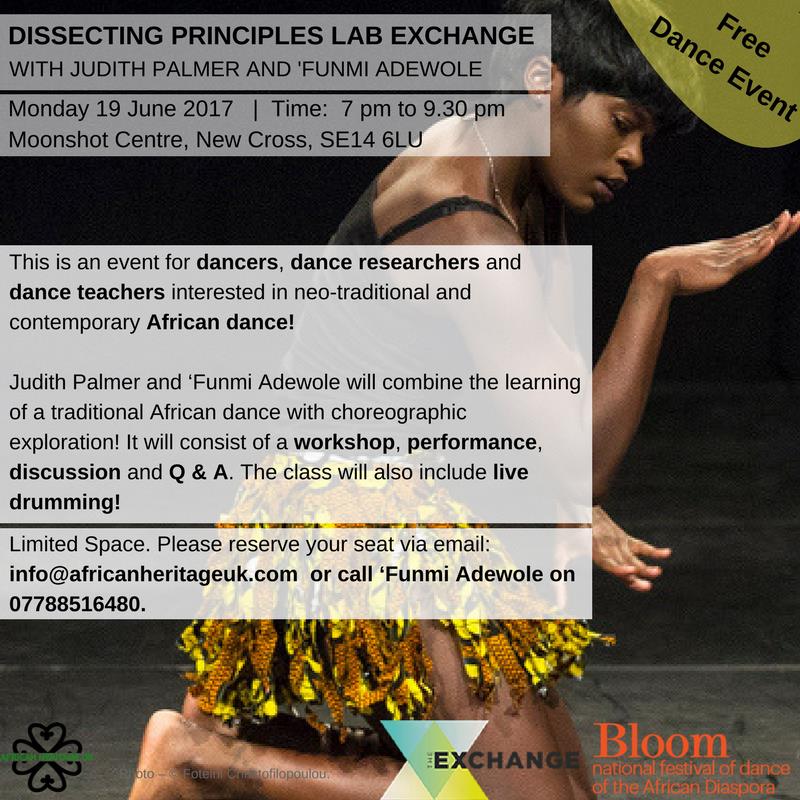 Dissecting Principles took place on Monday 19th June at Moonshot Centre (home of Irie! Dance Theatre) as part of a wider research project funded by The Exchange, which supports short investigative collaborations between artists and academics. The collaborators for this project were Judith Palmer, Director of African Heritage UK (the artist) and ‘Funmi Adewole, Early Career Fellow in Dance at De Montfort University (the academic).

The workshop was based on the Agbadza dance from Ghana. Judith taught us the core step followed by two variations. ‘Funmi then led a somatic inquiry into the step, leading on to improvisation tasks to engage with how anatomy informs the dance.

I was already familiar with Agbadza through my training with ‘H’ Patten at University of Surrey, however, since graduating it’s been increasingly difficult to find regular classes that explore traditional forms. With the growth of popular dances in recent years, including Afrobeats and Dancehall, there is (or should be) a further need to understand their roots, origins, and correct techniques for making sense of the mechanics in the body.

Dissecting Principles then, was a rare opportunity to focus on the form itself, the movement, how it works anatomically, how it can be translated and developed. I felt a clear difference in my execution of the step after ‘Funmi’s somatic exploration, so much so that it made me question why I’ve never been through that process before. Contemporary practices are often taught with a somatic focus – why not for African Dance forms?

The second part of the event was a panel discussion, inviting three contemporary dance artists to talk about their practices and their interest and engagement with traditional African dances. These panellists were Mbulelo Ndabeni, Racheal Nanyonjo and Avatara Ayuso.

Ayuso spoke about technique being separate from practice – technique informs practice, and practice is a way of thinking. She went on to discuss that where a technique is learnt impacts your practice, and the importance of understanding the cultural location of where that technique develops.

Ndabeni went into some detail about his dance journey, from growing up in Eastern Cape, South Africa to attending London Studio Centre, before performing with Matthew Bourne’s New Adventures for two years followed by Rambert Dance Company for seven years. Ndabeni discussed Africa as being judged Eurocentrically – he points his toes and is celebrated, he flexes his ankle he becomes less interesting. He went on to comment that to be Eurocentric is to be ‘more easily digested’, he is perceived to be less of a ‘threat’ because he ‘can do that thing (Europeans) know’. Ndabeni also shared that he feels he had ‘forgotten the connectivity to the earth that African dance has’, and questions whether as an artist, he has evolved or developed.

Lastly, Nanyonjo spoke about the dangers of a solely-European discourse for African dance practices, and the importance of giving space for voices from those countries and cultures to shape how they are presented abroad. ‘As a Ugandan British, I struggle to see how I can use the forms in my European discourse’, the answer: ‘not appropriation but appreciation’.

Dissecting Principles was an important event in the dance calendar – as evidenced by the 30+ strong artists and researchers who took part. The structure of: learning steps, then engaging in somatic inquiry, back to steps, into improvisation (all accompanied by Master Drummer, Charles James) followed by the panel discussion, is a format that should be used more widely. Giving space for artists to explore traditional forms in detail, to spend nearly an hour understanding the centre of one movement in the body, is something rare and valuable – it has to happen again.

Read more about the workshop here and be sure to stay up to date with future events from Judith and ‘Funmi.