As part of its 21st anniversary celebrations, ADAD hosted its biennial Bloom Festival across the country at events in Liverpool, London, Bristol, Gateshead and Leeds.

The session combined African-diasporic traditions with modern trends, giving an insight into Abel’s own company Mulembas d’Africa that has been running since December 2014. The key traditions explored included the use of the circle, travelling in a circular formation passing on movements around the group; as well as taking cues from the musicians such as breaks in the rhythmic pattern to indicate change of movement. Participants had the opportunity to work as a collective as well as to step forward to share their individual movement phrases that were repeated by the group – instilling a sense of community and mutual energy within the studio. 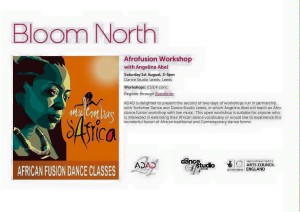