On Tuesday 20th October over 40 of Britain’s most renowned dance professionals gathered in London for a historic photograph featuring those who have been honoured in the Queen’s Birthday or New Years Honours lists for services to dance. This included my amazing grandmother Sheila Labhart who received a British Empire Medal in 2013 in recognition for services to dance and charity.

After a fair amount of persuasion (including a detailed itinerary, pre-booked travel assistance at London Euston and the promise of Cream Tea), Nan was convinced to go!

No issues on the train, though the assistance I’d booked at Euston was very (very!) slow. It also takes you underground which was surreal. The driver got us a cab and then we were on our way to Sadler’s Wells for the photograph. (NB never underestimate London traffic at any time of day)

Shortly after arriving we were taken on stage to be seated/placed. For my Nan it was a huge deal to be on the same stage that so many leading ballet stars had performed on. 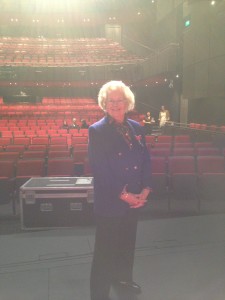 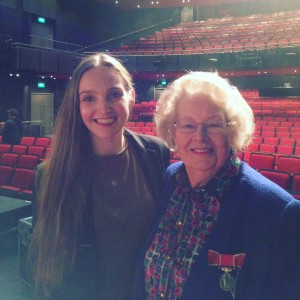 Me and Nan on Sadler’s Wells main stage

As soon as she spotted Dame Beryl Grey, my Nan marched straight up to her and became a little emotional when introducing herself. Grey was a huge inspiration for my Nan growing up and it was possibly the best outcome of the day that she was able to meet her. She is still buzzing about it now! (See cute pic below) 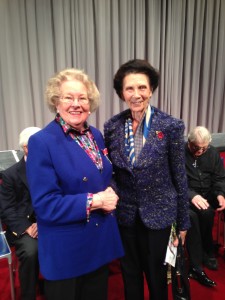 After introducing Nan to Namron Esq. and Nadine Senior, we had a lovely catch-up with Veronica Lewis MBE who remembered Nan from 30+ years ago – all this before heading off to Bill’s for cream tea! 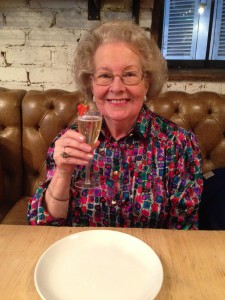 The event was really well organised and became a great Nan-Granddaughter day in the big smoke. Obviously, this wasn’t the aim of the photograph – more a happy byproduct!

The purpose of the photograph was to celebrate the achievements of leading dance professionals who had been recognised in the Queen’s Honours lists, bringing them together for the first time as part of Dance Umbrella 2015. To inspire future nominations for dance artists, teachers, managers, choreographers and innovators so that outstanding contributions in dance can continue to be highlighted on such an elevated scale.

Full details can be found in the Dance UK press release here. Further information about Sheila Groom School of Dance can be found here.