I will start by saying two things: 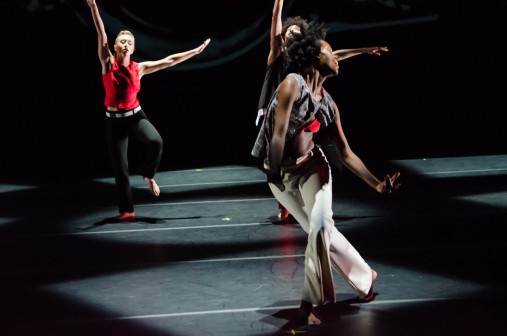 Safe to say, this was a pretty epic evening for me. I will try(!) and give an unbiased account of the two works included in the evening’s performance.

Urban Bush Women were back in Leicester 29 years after their last visit, as part of 2016’s Let’s Dance International Frontiers Festival. Alongside the performance and as part of the festival, there was also a conference entitled “Black Women in Dance: Stepping out of the Barriers”, in which Jawole was the keynote speaker. Further information on this aspect of the event can be found here.

Walking with ‘Trane: Side A

The first piece of the evening was Walking with ‘Trane: Side A (2015), choreographed by Jawole Willa Jo Zollar, Samantha Speis and dramaturg Talvin Wilks in collaboration with The Company. The work is described by Jawole as ‘a conjuring of Coltrane’s essence, based in rooted understandings of his music’. The dancers entered the stage one by one, performing unique solos that each had key characteristics seen in UBW’s other works and specific tropes of African Diasporic Dance.

Much like the Jazz music the piece is influenced by, each dancer moved as if responding to an internal rhythm. Working as an ensemble, the movement didn’t bring the music to life, but showcased how many different rhythms and polyrhythms can work together and compliment each other to make one piece – much like the structure of Coltrane’s compositions. There was a brief section of unison that brought all the dancers together, but for the most part the work was about the audience selecting which dancer to watch at what time. A group of soloists performing on stage together, connected by this one concept of Coltrane’s music.

Du’Bois A’Keen was a stand-out performer for me, her articulation and spirituality on stage was captivating. Tendayi Kuumba’s vocalisations and scats were powerful additions to the music and added another layer to the work. The use of projection and gobos to create railroad tracks or train lines on stage, using haze as well made the piece seem quite dense at first, leading on to this sense of freedom and liberation that carried the dancers through to the final section where they each left the stage one by one. Leaving Courtney J. Cook alone on stage, letting the remnants of the music continue to move her as the darkness fell.

This was clearly a spiritual piece, where the bodies on stage were speaking for the spirit of the dancer, calling out to lost ancestors, always coming back to the idea of power in community. 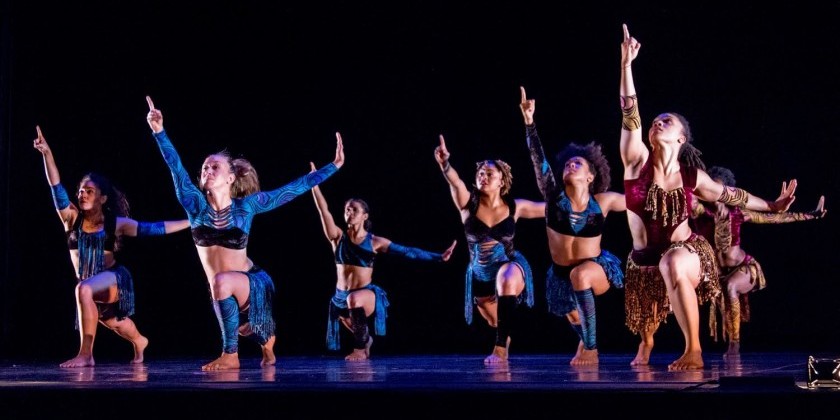 The second piece of the evening was dark swan, choreographed by Nora Chipaumire – meditating on women’s struggle to be free, interrogating the presentation and representation of the African female body. This piece drew heavily on African Diasporic dance traditions including the whining of the pelvis, contractions of the upper and lower torso and explosive, powerful jumps.

The recurring motif of the dancers placing one hand inside their underwear whilst looking directly out in to the audience was a clear challenge to the spectators. As opposed to being passive and/or sexualised by the male gaze, the dancers forged their own sexuality and dared the audience to react. Examining the acceptability and expectation of ‘black bodies’ being mutually exclusive to ‘sexual bodies’, by making the spectators feel less and less comfortable watching these women perform sexualised actions in a theatre space.

The work drew on the historical experience of Saartjie Baartman, dubbed the Hottentot Venus born in 1789 (est.). Belonging to the Khoikhoi in what is now known as the Eastern Cape, she was captured and brought to Europe and displayed as a “freak performer”, sexualised due to her “abnormally large labia and buttocks”. After years touring as part of a circus, caged and on display as a sexual object, she passed away age 26 in 1816. Shortly after her death, George Cuvier (French naturalist and zoologist) obtained Saartjie’s remains from local police and dissected her body. After taking a plaster cast, Cuvier pickled her brain and genitals and placed them into jars which were displayed at the Musée de l’Homme (Museum of Man) until as recently as 1974. Eight years after President Neslon Mandela’s request to the French government that Saartjie be returned home, on 6th March 2002 she was finally brought back to South Africa and buried on 9th August 2002 at Hankey in the Eastern State Province.

dark swan and a number of other pieces in UBW’s repertoire open up the discourse around the representation of black female bodies both historically and in current societies as a means of claiming the debate for themselves. In this work (and others) the dancers are in control of their identity and chose to present themselves in such a way as a provocation, nothing is ‘placed’ on them by the viewer.

Following on from dark swan and continuing the theme of black female representation, I really want to talk about the very end of the show at The Curve, where the dancers took their bows and then performed Batty Raps.

Batty Raps stems from the piece Batty Moves, a work that acts as a reclamation of the much-contested site of the female buttocks, which premiered in 1995. Batty Raps is the final section of the piece that invites each performer to step forward and perform a short rap or rhyme about themselves, celebrating the individual dancers whilst being supported by those remaining, who create the beat.

“Now I see the glory of these thighs and I really understand why my hips’ so wide…” from Bennalldra Williams’ Batty Rap, 1995.

For the performance at The Curve, Jawole also stepped forward to perform, which was a happy surprise for me! Each dancer came forward and rhymed to their own rhythm and pace, celebrating the female form and their individuality, as messages of black female empowerment.

The programme was a great edition to the festival and a long-overdue return to the UK for Urban Bush Women. From their home in Brooklyn, UBW are both dancers and facilitators, with community and engagement work a key part of their practice. They are a unique voice for the African-American experience and use their work to educate and empower those in their locale. I feel really lucky to have seen them live at last and to have met Jawole, here’s hoping they don’t wait another 29 years to come back again.