When I arrived, the Box Office at The Lowry were turning people away! The Head Wrap Diaries by Uchenna Dance (Artistic Director Vicki Igbokwe) performed for one night only on Tuesday 18th October in Manchester, the work’s first tour outside of London. 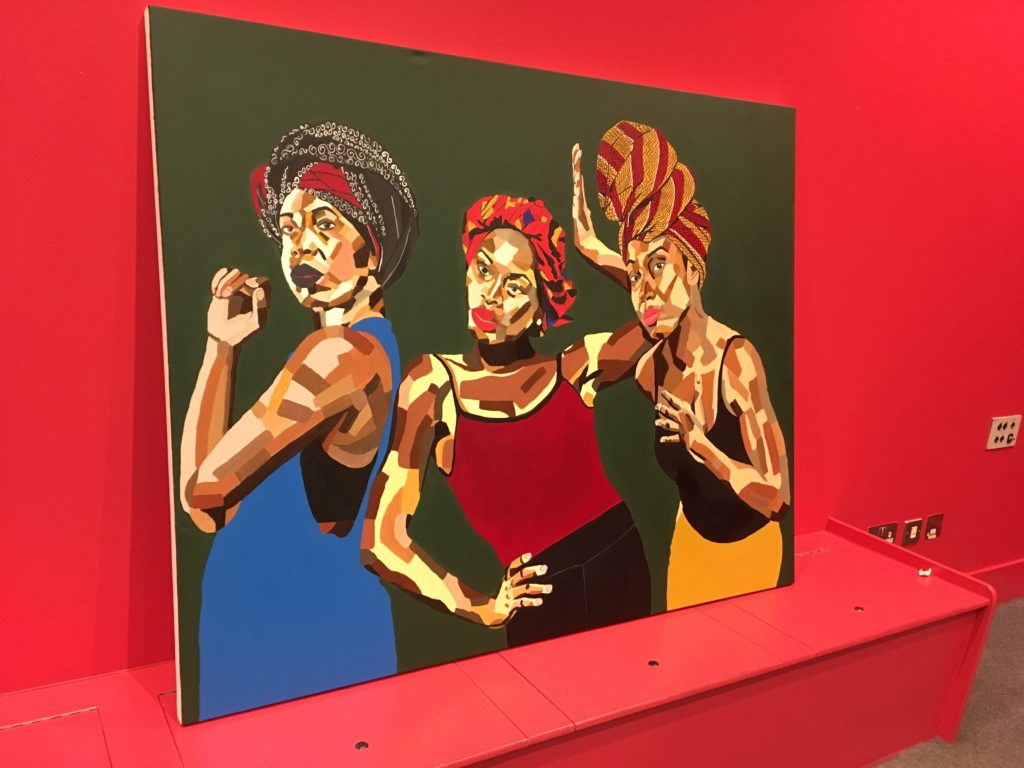 The piece began with the three dancers, Habibat Ajayi, Shanelle Clemenson and Sheila Attah, entering the space and kneeling down stage right. They each tilted forwards placing their heads on elaborate, printed fabric and began to tie it as if making a head wrap. With use of breath, contractions and undulations of the spine, the women crawled slowly backwards towards stage left, pulling the fabric with them – laying bare their ancestry and heritage across the stage, perhaps also referencing the weight of this legacy as something that is carried with them with each breath.

Later on, the piece introduces us to a range of characters including:

These, amongst others, take the audience on a hair journey from youth through to adult hood. There was a lot of humour in the piece, along with the use of voguing and house styles before going on to more traditional African dance forms. All of which were used as tools to celebrate the cultures from which the work takes inspiration. 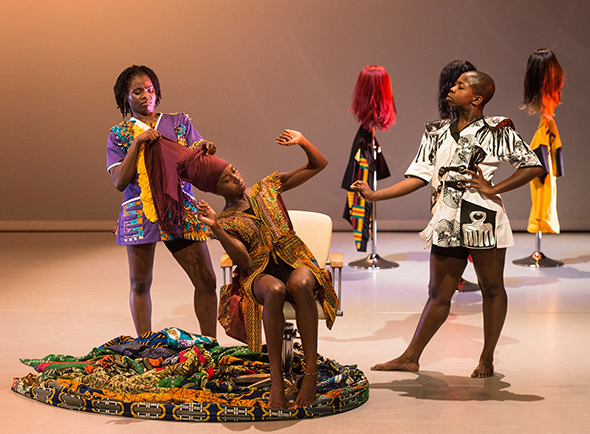 A key thing I enjoyed about the work, was the audience it drew to The Lowry. I would say that 80% of the women there, came dressed in beautiful head wraps themselves. There was a real sense of community, a lot of the audience members seemed to know each other and called across the rows to say hello. The audience also were not afraid to react verbally to the work as it was happening, reaffirming the work at key moments that resonated with them – sharing their experiences of the hot comb or the frustrations of going to the hair salon.

The Head Wrap Diaries reminded me a lot of Urban Bush Women’s HairStories, choreographed in 2001 by Artistic Director Jawole Willa Jo Zollar. In HairStories, similar characters to those in The Head Wrap Diaries are introduced, including a young girl and her mother, a working professional, an older woman – all sharing their experiences as black women and their ongoing relationship with their hair. The use of head wraps, props and wigs is unique to Uchenna Dance’s production, however both pieces utilise voice-work, interactions with the audience and Africanist performance tropes such as polyrhythm and use of the circle. Both HairStories and The Head Wrap Diaries push forward the same message: the history and representation of black female hair as a negotiation of power from infant right through to grandmother – how hair has been a key factor in the construction of black female identity across the Diaspora and beyond. Both companies indicate a strong link between cultural heritage, cultural experience and choreography. 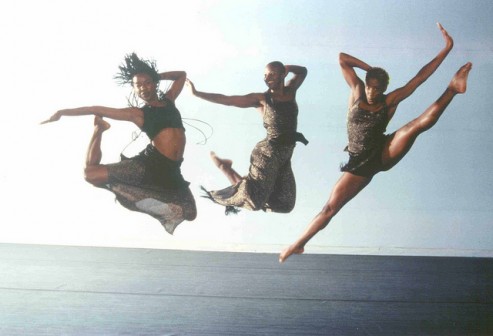 Both works are as poignant in 2016 as they would have been some 40 years ago, as black hair continues to be politicised as “against the rules”. Take, for example, the recent outrage at a school in South Africa where students have seemingly been punished for wearing their hair in it’s natural condition (and not straightened or scraped back) as it was deemed ‘distracting’ for other students.

‘Leago Mamabolo, 18 and in her final year at the school, said students had simply had enough of the discriminatory treatment. Leago’s hair was referred to as a “bird’s nest” because of her dreadlocks. “You’re in fear when you go to school because you know you will be policed,” she said.’
Greg Nicholson for the Daily Maverick, part of the Guardian Africa network, Wednesday 31 August. Read the full article here.

Needless to say, both The Head Wrap Diaries and HairStories are important works. At The Lowry, Ajayi, Clemenson and Attah were all mesmerising to watch and I got the sense that everyone left the space feeling empowered by their energy and story-telling.

My only disappointment was the size of the auditorium. The work was performed in the small Studio Theatre at The Lowry which limited the number of people who could experience this culturally important work.

I am very glad that Uchenna Dance were able to tour the work ‘up North’ and hope the warm reception the company received will ensure they come back (to a bigger space!) soon.