After a false start, the piece begins with documentary footage put together by renowned television journalist Adam Curtis. Shown on a triangular screen (a symbol of the Illuminati) the compilation is a mixture of interviews with young conspiracy-believers, combined with footage from CIA experiments and pop music videos – all giving a wider context to the work.

MK ULTRA relies on this footage, along with the projected images of butterflies, birdcages and eye of the Horus (all alleged signs of the Illuminati) that also feature on the unitards designed by Gary Card. If we were to strip these elements away, I’m not sure how clear the choreographic intention would be. 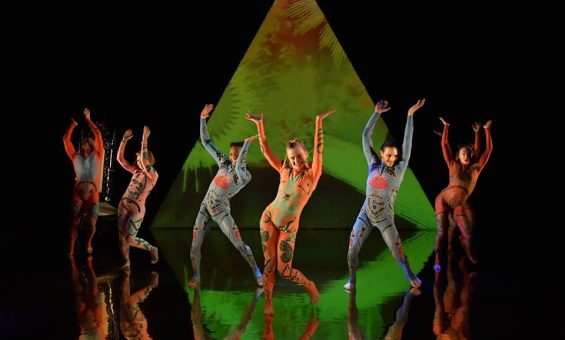 The work looks at the medium through which Illuminati symbols and messages are transmitted to society, citing pop star’s dance routines as a starting point. To show this through movement, the programme states that Kay manipulated ‘styles of dancing’ commonly found in music videos, including ‘twerking, krumping and street styles’ along with ‘a strong technical and contemporary aesthetic’.

“…this is difficult, challenging dance, which pushed the dancers vocabulary to the maximum and pushed the work out of the realm of pastiche and into the avant-garde” Rosie Kay, 2017

I was disappointed to see (both on stage and in the programme) that Kay didn’t work with a Hip Hop specialist/consultant on the piece, despite trying to use this vocabulary. This ‘street’ movement language (I use the term loosely) did not translate easily on the company dancers. The over-exaggerated facial expressions and choice of steps made the work seem parodic, rather than ‘pastiche’.

The wider problem is that a lot of pop music videos misappropriate African Diasporic forms, bastardising them almost beyond recognition for commercial gain. Seeing the dancers repeatedly thrust their pelvis backwards (losing proper technique and control of their chest in the process) to DJ Rashad’s ‘Make That Booty Clap’ encapsulates what is really wrong with pop music videos – yet the work fails to examine this.

Shenelle Clemenson is a fierce performer, but Kay doesn’t utilise her full potential and the audience is cheated of her phenomenal skill in Waacking and Vogue (as seen in Vicki Igbokwe’s The Head Wrap Diaries) – which could have added stylistic integrity to the work.

Oliver Russel’s and Ryan Munroe’s solos make for challenging viewing. With references to Krump, Michael Jackson’s crotch-grab, and gun fingers – it is unclear what message the choreography is trying to convey. 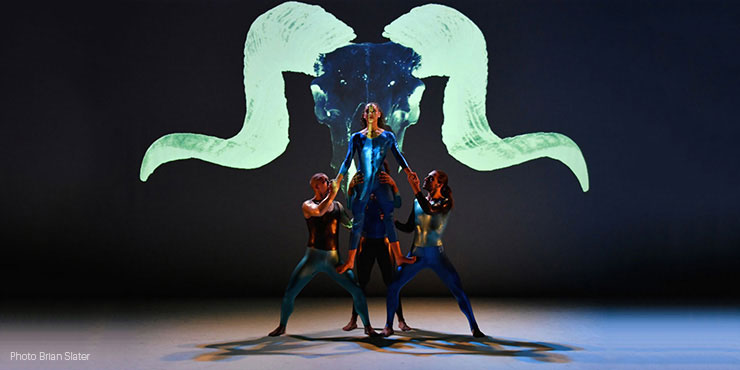 Presenting a change of pace, Harriet Ellis performs a daring contact-based quartet with Ryan Monroe, Joao Maio and Oliver Russel. Diving off of Maio’s shoulders into the arms of Monroe and Russel, Ellis spends most of her time above their heads, which was visually exciting, as a representation of the alleged puppetry of pop music stars controlled by the Illuminati.

Ultimately, MK ULTRA was a difficult watch. I felt strongly about the choice and use of movement language, and believe a consultant working within these ‘street’ forms was necessary to shape the work.

The recurring documentary footage by Adam Curtis and the flashing images were captivating, but perhaps overbearing – the choreographic intention became lost, and I left with the sense that the research overshadowed the art.