“…The whites have become black.

A particular sort of violent destructive, nihilistic gangster culture has become the fashion and black and white boys and girls operate in this language together.

This language which is wholly false, which is this Jamaican patois that has been intruded in England and that is why so many of us have this sense of literally of a foreign country.”

Historian and Broadcaster David Starkey provoked a storm of criticism in August 2011, when he made these comments live on BBC News as part of a discussion on the riots that ensued in England following the death of Mark Duggan, who was shot dead by police on 4 August that same year.

Using audio from this interview, mixed with Jazz sounds and extracts from Enoch Powell’s famous speech of the same name, Rivers of Blood opened the Triple Bill at Rich Mix on Friday 28th April.

In this piece, Sean Graham (choreographer and Artistic Director of Foreign Bodies Orchestra)  gave a thought-provoking solo using UK Underground Jazz and Krump to translate this narrative into theatre. The intricate footwork, his body moving in waves to the rhythm of those hateful words: Graham drew the audience in to this trauma of identity. Stripping this back, the Jazz movement representing the everyday culture of Black British communities, living their lives in a degree of normalcy, was placed in stark contrast to the portraits given by the media – where each step, each swing of the hip, was a threat edging the British closer to becoming “strangers in their own country”.

I struggled to listen to these recordings, to hear again how Black people were represented, spoken about, to hear the fear generated by those in a position of power and influence. There were too many parallels to more recent events.

Graham turned to the back, raised his left arm in a Hitler salute followed by his right arm in a Black Power salute – a key moment, repeated throughout, that gave further poignancy to the work.

Though the movement language stemmed from UK Underground Jazz, a form Graham described in the post-show talk as “organic to Britain, a key part of Black British experience post Windrush”, I couldn’t help but question how well the steps themselves could convey the message of the piece, if it wasn’t for the sound score. More of the narrative could have been drawn out from the choreography; though perhaps the aim was to show the disparity between what was lived (the dance) and what was presented (the sound).

The second piece of the evening, Buskin’ Boy, was a tale of ‘Role Model vs. Road Model’. The audience were presented with four characters played by three performers; a coming of age tale whereby a young man ‘Marvin’ flees his estate, after narrowly escaping a violent attack to which he lost his younger brother. In the search of new opportunities, it isn’t long before an enigmatic character turns up with promises of stardom and an offer to take the young man under his wing. But there’s no quick fix, and Marvin’s problems just become greater.

There was some incredible talent showcased in this piece: use of spoken word by Sean Graham (off-stage), Beatboxing by Marvin’s younger brother*, phenomenal Krump by Marvin*. For me, these skills weren’t shown enough.

There was a lot of text used on stage, which didn’t always play to the cast’s strengths. The Beatboxing was by far the most impressive I’ve seen, and I was in total awe of Marvin’s* technique – his isolations, muscle control, the power in his hits stirred up the audience and gave a real intensity to the work. I wanted to see more of this, and felt the text could have been trimmed down to give more space to the movement.

Race Tracks was the final piece of the night, with a cast of five dancers competing in a surreal Olympic Games for the most coveted prize of all – British Citizenship.

Playing on racial stereotypes, with clever use of political messages (rephrased and printed as mugshot letter-boards), the piece is an impassioned undress of acculturation and what it takes to be accepted.

Key moments included Frank’s* monologue “Tick the Box”, problematising the notion of declaring yourself a minority, knowing your place, and joining the ‘other’ queue at passport control.

Seeing the dancers step across the stage as a mugshot conveyor belt, holding letter-boards with “Muslim Only Public Toilets”, “They’ve Stolen All Our Jobs”, “One in Five Britons Will Be Ethnics” and the like, was shocking to see.

The movement vocabulary played to the performers individual strengths, including: Breaking; Contemporary; Krump, Animation and Capoeira. At times, and similar to Buskin’ Boy, the text overpowered the dance unnecessarily.

Perhaps Graham needs to be reassured that his movement could tell the story better than any verbal language. That is the strength and versatility of dance, of his dance, and is how I was most moved by each work in the Triple Bill. In its current format, the programme is calling out for a dramaturg to help refine and shape each piece, to draw out the key strengths and pivotal messages that could transport it to bigger stages and wider audiences.

Political Bodies was an important evening of dance theatre, with a strong socio-political message. I left Rich Mix thinking about patriotism, borders, nationality, and how the political shapes our everyday experience. A Triple Bill that will be difficult to forget. 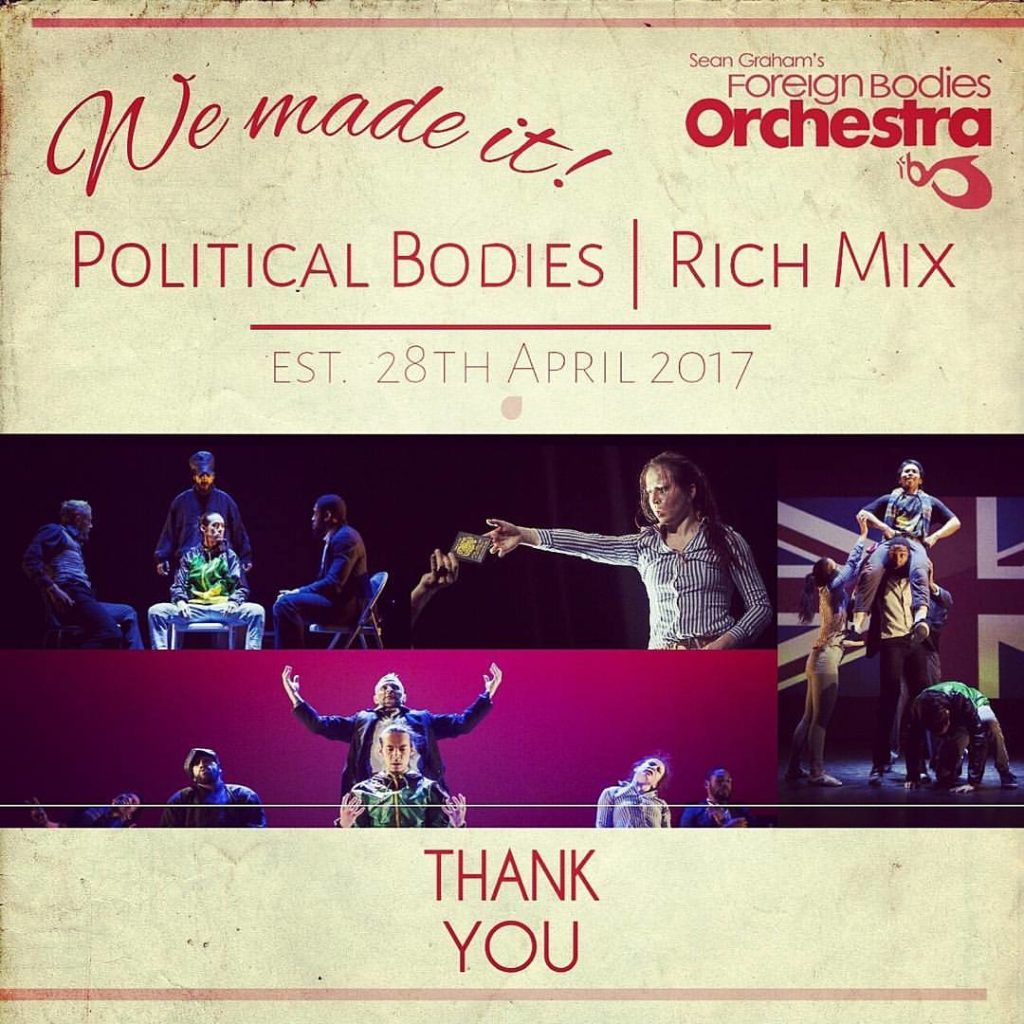 *It’s frustrating that I don’t know the dancers names, though I’m beginning to think that performances at Rich Mix generally don’t have programmes – something that can be addressed I hope!