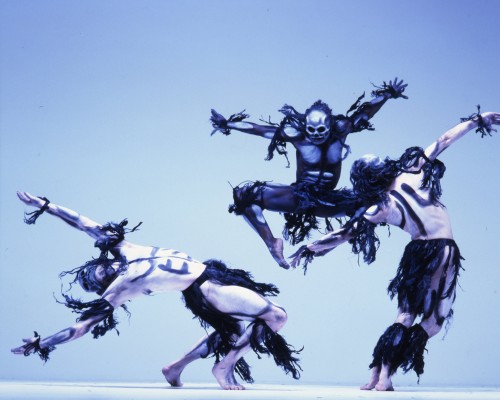 Christopher Bruce’s 1981 work Ghost Dances is one of the most celebrated contemporary dance pieces of its generation. It returned to UK stages for the first time in 13 years in November 2016, and tours throughout 2017. I got to see it at Sadler’s Wells on the 20th May, as part of a Triple Bill with works by Aletta Collins and Didy Veldman.

The Days Run Away Like Wild Horses by Aletta Collins. Photo by Ellie Kurtz

The Days Run Away Like Wild Horses takes inspiration from an Oscar-winning 1981 short animation created by Zbigniew Rybczynski, which is recreated in the first section of this piece. The curtain rises and we are met with a family home in one room, with three doors and purple walls an array of characters enter and exit whilst one female dancer sits unmoved at the dinner table. We see a boy crawl in through an open window, only to throw his ball outside and climb back out again. A young couple kissing before bouncing around on the sofa. A plumber walking through holding a toilet. The repetition is comical and the characters seem to take us on a journey through the memories of the sitting performer. The choreography is slick and the dancer’s timing is on point, at times it is laugh out loud funny – I would have gladly watched this material developed into a longer work.

After a short time, the walls and characters disperse, to be replaced by the full cast in burgundy costumes on a blank stage. The dancers go through mass unison and canon sections, creating silhouettes on the white syc…the material is not as exciting to watch as the opening and seems oddly abstracted, yet it continues for much longer.

Special mention, though, to Jacob O’Connell who performs an excellent solo, with such fluidity and control, dancing on the knuckles of his toes moving in and out of the floor – he is brilliant to watch.

The 3 Dancers by Didy Veldman. Photo by Tristram Kenton

The 3 Dancers (2015) opens with two trios, one dressed in black the other in white, dancing and intertwining whilst unable to let go of each others hands. Each trio occupies opposite ends of the stage, and is lit one after the other with darkness cueing their stillness.

Based on Picasso’s painting of the same name, The 3 Dancers references cubism through Kimie Nakano’s set – namely, huge shards of glass that piece the stage striking down from the rig. As these fracture the space (or the perspective) the relationships on stage fracture too, as male dancers clash and females swap from one group to the next. Veldman seemed to break the dancers bodies down into distinct planes of motion, to show different viewpoints at the same time, within the same space. Though often visually stunning, the material became predictable and the initial impact of the piece became lost.

At last, the piece we were all there to see. The curtain rose and a quiet fell over the audience, leaning forwards with anticipation, hoping it would be everything we needed it to be.

The sound of strong winds blowing as the three Ghosts appeared, those familiar steps, hair flicks, holding arms – having first studied it at school aged 16, it was like seeing an old friend. The eight villagers step forward in duets or small groups, we see their characters as playful couples, friends, and get lost in the folk steps before they are frozen in time and taken away ominously by the Ghosts.

The deep plie in second with arms shooting straight out ahead, kicks across the body swinging the arms high, triplets forwards and weighted steps back all set to that iconic score – the audience were transported to another time through Bruce’s signature steps.

The Rambert dancers all upped their game for this finale, showing a distinct responsibility to this much-loved, poignant work.

Though 36 years old, and in direct response to Pinochet’s 1973 coup (in which 35,000 Chileans were murdered), Ghost Dances has a resonance in 2017. The work shows those who lose their lives in political regimes as more than numbers, statistics or headlines and gives them personalities, makes them human, relatable – and subsequently their demise all the more tragic.

A brilliant return to UK stages, and a smart one – it’s run at Sadler’s Wells sold out weeks ahead of time. Find out where you can watch this important piece of dance history here.